How Much is HBO Max on HULU [Comprehensive Guide] 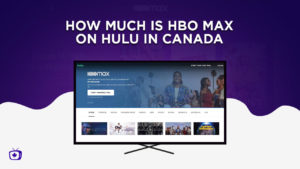 How much is HBO Max on Hulu? It costs $14.99 per month, but there are a few things to keep in mind before adding the premium add-on to your account. Notably, despite the fact that an HBO Max subscription is bundled with Hulu, not all HBO Max shows and movies will be available to stream through the Hulu app.

On top of the cost of a Hulu subscription, the HBO Max add-on costs $14.99 per month. This is the same price as setting up a subscription through HBO Max directly. To put it another way, signing up for HBO Max through Hulu does not save you any money. While HBO Max does offer a cheaper ad-supported plan for $9.99, Hulu subscribers only have the option of upgrading to the more expensive and ad-free HBO Max plan for $14.99.

Those who sign up for HBO Max on Hulu for the first time typically get a seven-day HBO Max free trial before having to make their first monthly payment. We are going to explain how much is HBO Max on Hulu, the plans, and subscriptions available for its users.

How much is HBO Max on Hulu?

The HBO Max add-on, which costs $15 per month additionally on your existing Hulu subscription, is the best way to get HBO Max on Hulu. The ad-supported plan on Hulu starts at $6 per month.

You’ll get all of your favorite HBO movies and TV shows, as well as the ability to log into the HBO Max app with the add-on for even more content.

For the same price, Hulu also offers a more limited “HBO” add-on. This add-on does not include access to HBO Max, as the missing “Max” in the name suggests. Because both options are the same price, getting the HBO Max add-on rather than just “HBO” is a no-brainer.

When you sign up for the HBO Max add-on as a Hulu subscriber, you’ll get a one-week free trial.

How to Add HBO Max on Hulu

HBO Max is simple to add to Hulu, and the process is similar to adding any other add-on or upgrade, with the option available in the settings menu.

How to add HBO Max to Hulu:

HBO Max channels and content will be available to watch directly in the app after being added to a compatible plan. However, this does not mean that all of the HBO Max content is available on the Hulu app.

Through the Hulu app, the HBO Max add-on gives you on-demand access to everything on HBO. On supported devices, you can even watch live HBO streams through Hulu. Subscribers to the add-on can also log into the HBO Max app with their Hulu account information to access even more content.

Hulu will have most HBO premieres available within minutes of the episode airing on the cable channel. On-demand access to nearly all of HBO’s classic programming is also available. Naturally, the entire “Game of Thrones” library is available if you want to watch it on repeat until you’ve memorized every detail by the time the much-anticipated prequel arrives.

You can catch up on shows like “Westworld” and “Barry” that are in-between seasons if you want to mix up your binge-watching. You can also watch some of HBO’s most popular shows, such as “The Sopranos,” “Curb Your Enthusiasm,” “The Wire,” “Sex and the City,” and many others.

Meanwhile, you can stream an even larger selection of shows and movies by switching to the HBO Max app. HBO Max, in particular, offers new Warner Bros. films on the same day they are released in theaters. This includes upcoming films such as “Godzilla vs. Kong,” which will be released on March 31. You can watch the animated film “Tom and Jerry” right now on Netflix.

You can also watch HBO Max originals like “The Flight Attendant” and “Raised by Wolves” with the add-on. Not to mention all of the additional movies available through HBO Max — after all, HBO stands for Home Box Office. “Joker,” “The King of Staten Island,” and “Birds of Prey: Harley Quinn” are among the most recent additions, alongside classics such as “Kill Bill: Vol. 1,” “Billy Elliot,” “Cast Away” and “City of God.”

Can I Use the Hulu App to Watch HBO Max Content?

The add-on can be thought of as a package. HBO is available directly through Hulu, and you also get access to the HBO Max app as a bonus — all for the same price.

Can I watch all of HBO Max on Hulu?

Despite the fact that HBO Max is available through Hulu, the add-on does not automatically grant access to all of HBO Max’s content. HBO Max originals and exclusives, for example, are only available to stream through the HBO Max app, not the Hulu app. Users of the Hulu app will be able to access HBO content, including the linear HBO channels, for the most part.

That’s not to say Hulu subscribers won’t be able to watch these originals or exclusives; it just means they’ll have to download the HBO Max app separately. TV Everywhere support for a number of apps, including HBO Max, is included with a Hulu subscription.

Hulu subscribers can log in to the HBO Max app using their existing Hulu subscription account details now that TV Everywhere support is available. The Hulu subscriber will be able to stream everything HBO Max has to offer after signing in.

As a result, anyone who signs up for HBO Max through Hulu should be aware that they will need to switch apps to watch certain shows or movies. If that’s an issue, it might be worth it to sign up for HBO Max directly. That isn’t to say there aren’t advantages to bundling subscriptions; there are.

For one thing, HBO content is accessible through the Hulu interface, so if that’s the primary reason for considering bundling the two services, the fact that the additional Max content requires a separate app may not be a factor. Similarly, some people may prefer the convenience of being able to manage both subscriptions through one service.

The company recently announced a new $9.99 tier that includes advertisements, bringing it closer to those services. Here’s where you can get the ad-free HBO Max plan for $9.99.

How Does HBO Max Compare to Hulu in terms of Price?

On the surface, choosing Hulu appears to be a no-brainer. Its on-demand-only plans are still very affordable at $6.99 per month or $69.99 per year, and it has a large library of over 4,000 titles to choose from.

However, in order to get the same functionality as a full-fledged HBO Max subscription, you’ll need to buy a few add-ons that will significantly increase the cost. Do you want to avoid obnoxious advertisements? After that, select the $12.99 Hulu (No Ads) option.

If you’d like to share your account with more than two people, click here. Unlimited Screens is an additional $9.99 per month, bringing the total to $23 per month. The HBO Max price tag of $14.99 for its ‘Ad Free’ plan doesn’t seem so unreasonable.

Hulu, without a doubt, provides excellent value and flexibility. Students can subscribe to its Basic plan for $1.99 per month, while cable TV subscribers can upgrade to Hulu with Live TV for $69.99 per month, which includes Disney Plus and ESPN Plus in addition to a roster of more than 75 live channels and a vast VOD library.

As a result, it outperforms HBO Max in terms of cost. However, few would argue that HBO is the king of content when it comes to sheer quality – and any dissenters can take their complaints to Tony Soprano.

How Does the HBO Max Price Compare to other Streaming Services?

If you’re looking for a comprehensive cable replacement – and even a passing interest in live sports – an IPTV service, such as the aforementioned Hulu + Live TV, is probably your best bet. Expect to pay four times the price of HBO Max.

Sling TV is the most cost-effective, with monthly plans ranging from $35 to $50. Their highest-tier package has around 50 channels, but you can upgrade to Extras for a fee, which can significantly increase your channel selection.

At $64.99, YouTube TV is near twice the price of Sling, but it compensates by providing 85 + channels and an exceptional Cloud DVR  Unlimited storage that allows you to skip the commercials. FuboTV, on the other hand, outperforms YouTube in terms of selection. The $64.99 Starter Plan gives members access to over 100 channels, and you can always upgrade to Elite if you want more.

HBO Max is available on Apple TV, Android TV, LG Smart TV,  Samsung TVs from 2016, and later, Xbox One, PlayStation 4, Roku, and Fire TV devices. When you open the app after it has been downloaded, you will be prompted to log into your account. You can create one from within the app if you don’t already have one.

What is Included in the $5.99 Hulu Subscription?

Hulu offers access to full seasons of hit movies, TV shows, and Hulu originals on-demand for only $5.99 per month. Hulu also has FX on Hulu, which features exclusive shows and TV shows that air on FX the next day. Here’s what you can anticipate from this service: … Disney+, Hulu, and ESPN+ are available as a bundle.

How long will HBO be available on Hulu?

Is Hulu basic worth it?

It’s worth it to pay for the ad-free version of Hulu because you’ll get tired of seeing the same ads over and over. It’s well worth the money to be able to watch your favorite shows without having to deal with DVR issues or clumsy on-demand set-top boxes.

When HBO Max is added to a Hulu subscription, it costs $14.99 per month. HBO Max can be added to any Hulu plan directly from the settings’ “Manage Account” section. The subscriber will be able to stream HBO content through the Hulu app once they have been added to a Hulu plan.

The subscriber will need to download and sign in to the HBO Max app for almost everything else. As a result, any individual or household looking to get the most out of HBO Max will need to have both apps installed on the same device.

While having to use two different apps is inconvenient, bundling HBO Max with Hulu may make it easier to manage subscriptions in general, especially if the individual or household already has other premium services bundled with Hulu.